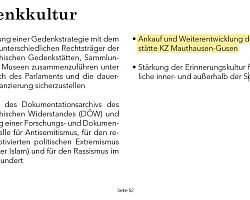 The Austrian conservatives and progressive Greens agreed in the coalition contract for the new Austrian federal government (2020-2024) that remnants of the former KZ Gusen concentration camp complex should be taken into public property within the next few years.

On behalf of +40.000 widely forgotten KZ Gusen I, II & III victims, we are glad that this new government will be the first in Austria´s modern history to take really responsibility for this biggest but forgotten former Nazi concentration camp on Austrian territory that had more victims than the related Camp Mauthausen.