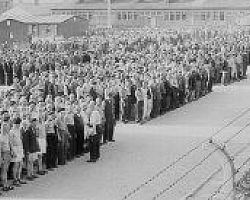 At a joint wreath-laying ceremony on May 4, 2021 in the Gusen Memorial with Governor Thomas Stelzer of Upper Austria and the ambassadors of Israel, the United States of America, France, Poland and Luxembourg, Austrian Interior Minister Karl Nehammer announced the purchase of some remaining parts of the former KL Gusen I in Langenstein and the former KL Gusen II in St. Georgen/Gusen by the State of Austria.

Thus, 76 years after the liberation of what was once the largest and most cruel concentration camp complex on Austrian territory, which also had by far the highest number of victims, the Austrian Federal Government is now sending a worthy and long overdue symbol of remembrance to the world.

The Republic of Austria now acquires:

The purchase of these structural remains and areas represents a milestone in the remembrance policy of official Austria, which is now willing to secure a worthy commemoration of the more than 40,000 victims of the former Gusen concentration camp complex from more than 20 nations for the future.

The Republic of Austria has thus taken a unique historical opportunity to correct the systematic exclusion of Gusen from the official remembrance policy, which has been practiced for decades, and to bring the memorial areas in Mauthausen, Gusen and St. Georgen in relation to each other in accordance with their historical importance and interdependence. This new approach will also enable future generations to better learn all aspects of the inhumanity and merciless exploitation that was practiced between 1938 and 1945 in the former St. Georgen-Gusen-Mauthausen complex of concentration camps.

It was also lined out that the concepts for the future use of these memorial areas will be developed under the leadership of the Mauthausen Memorial together with the local communities and international, national and regional organizations concerned.

Unfortunately, the former "Jourhaus" entrance tower into KL Gusen I and the two huge former massive prisoner accommodation buildings Block 6 and Block 7 that housed up to 1,600 inmates each can´t be taken over by Austria yet. However, we very much hope that the current owners will soon meet the legitimate interests of tens of thousands of affected families all around the world soon along with this three very important additional objects.