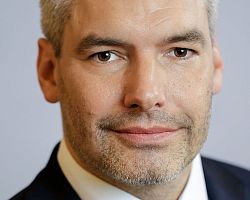 According to message No. 17869 of Saturday, May 9, 2020, the Federal Ministry of the Interior announced that the Austrian Federal Government decided on May 8, 2020 in Vienna to start negotiations with the owners of the properties concerned and the remaining original buildings.

Federal Chancellor Sebastian Kurz emphasized: “The purchase of the remaining parts of the Gusen satellite camp is an important step this year, 75 years after the liberation, to allow our historical responsibility to be followed by concrete action.”

Vice Chancellor Werner Kogler emphasized that it is important “that a warning and worthy memorial be erected in Gusen. The memory of the many victims of the Nazi crimes and of the genocide remains a moral and a political obligation, which complies with the basic anti-fascist consensus of the Second Austrian Republic founded anew every day. ”

Interior Minister Karl Nehammer said: “By purchasing the remaining properties of the Gusen concentration camp and developing the existing memorial further,” a dignified memory of the victims of the former Mauthausen-Gusen concentration camp can be guaranteed.” These “central locations of the Nazi regime of terror in Austria are still a symbol of the Holocaust” and would remind of the murders, but also of the shared responsibility of Austrians in these acts.

Upper Austrian Governor Thomas Stelzer recalled the “responsibility that comes from the dark hours in our history. The memorials are places where this memory is kept alive. It is therefore important to preserve these places for an up-to-date memory.”

In the previous year, the Polish Prime Minister Mateusz Morawiecki had at first expressed interest in buying the last remnants of the former Gusen I concentration camp by the Polish Republic and last reaffirmed this in December 2019 during a visit by German Chancellor Angela Merkel to the Auschwitz Memorial.