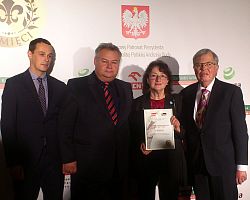 It was a great honour for us to have been invited by the Museum of Polish History to take part in a gala evening of Polish magazine "Do Rzeczy" in the Royal Castle of Warsaw to receive the diploma "Straż Pamięci" on November 13,  2016 for more than 30 years of hard strugle to keep the memory and research on more than 40.000 victims of the former KZ Gusen complex of concentration camps alive. GMC was represented in Warsaw by Mr. Bernhard Mühleder, Mr. Rudolf A. Haunschmied, Mrs. Martha Gammer, and Mr.  Hannes Gammer.

Since Nazi-Germany exterminated an important part of the Polish intellectual elites at KL Gusen I (up to 28,000!), official Poland today ranks Gusen as the 2nd Katyn.