Historic Handshake at Act of State in Gusen 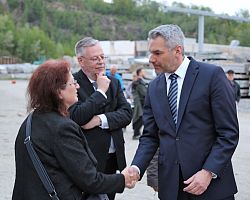 This historic handshake between Austrian Chancellor Karl Nehammer and the president of the Gusen Memorial Committee (GMC), Ms. Martha Gammer, took place on May 4, 2022 at the state ceremony of the Austrian federal government on the grounds of the former Gusen I concentration camp.

For us it symbolically marks the handover of the commemorative work on the former KL Gusen complex of concentration camps, carried out for decades by the Gusen Memorial Committee, to the care of the Austrian Federal Government 77 years after the liberation of this biggest Nazi concentration camp complex on Austrian territory.

This day was also historical because it was the first time in history that an Austrian Federal Chancellor visited the former Gusen camp complex in memory of the more than 70,000 people who once suffered in this utmost brutal site of Nazi extermination policy in Austria with death rates of up to 90% in certain groups of inmates.

Austrian head of state Alexander Van der Bellen promised this day on the former roll call square of KL Gusen I: "Austria will do everything to make this place transformed into an appropriate place of remembrance, which is worthy of the memory of all victims." He also stated: “For a long time, the Concentration Camp Gusen was overshadowed by the so-called main camp Mauthausen. Gusen wasn't as present in our culture of remembrance as it should have been. This circumstance, this grievance is to be remedied as of today.”

We thank Eckhart Herbe for this historically very significant photograph in the history of the 2nd Republic of Austria.