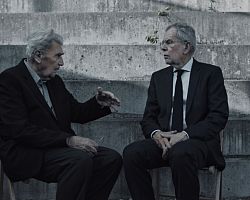 The new documentary "Surviving Gusen" by Gerald Harringer and Johannes Pröll had its world premiere June 1, 2021 as one of the opening movies at the international film festival "Crossing Europe" in Linz, Austria.

With excellent camera work and first-class sound, this touching film reminds with survivors Karl Littner (Gusen II) , Stanislaw Leszczynski (Gusen I) and Dusan Stefancic (Gusen II) to the former Gusen concentration camp complex that was the worst compared to many other such big concentration camps in Nazi Germany.

Unique landscape shots remind also that many other people of the Mühlviertel region witnessed "evacuation" transports from concentration camps like Gross-Rosen, Buchenwald, and Auschwitz in early 1945 to these death camps along the railway line between the Czech-Austrian border and the former Mauthausen and Gusen death camps.

It also documents the overbuilding of the former camp grounds at Gusen in the decades after the war and the neglected conditions of the last remains of the former KL Gusen I with the example of the former roll call square, which was completely overgrown also by 2021.

Very touching is also that Austrian President Alexander Van der Bellen took time to listen to last survivors of the Gusen death camps along with his participation in the 2017 international commemoration at Gusen as the first Austrian head of state 72 years after the end of World War II.

This new documentary reflects especially information from the memoirs of Karl Littner that were published for the first time in 2011 by the Gusen Memorial Committee (GMC) in the book "Life Hanging on a Spider Web".