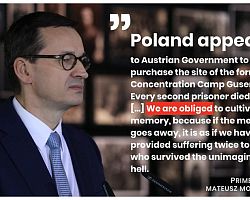 Polish Prime Minister Mateusz Morawiecki appealed at the 10th anniversary of the Auschwitz-Birkenau foundation last Friday, where German Chancellor Angela Merkel was present too, to the Austrian Government to purchase the last remnants of KL Gusen I now!

The former KL Gusen complex was much bigger and had significantly more victims than the related KL Mauthausen twin installation but never became an adequate memorial site. More than 50% of 71.000 (!) inmates were murdered at the KL Gusen death camps by Nazi Germany. Of these 27.000 (!) citizens of Poland were murdered at Gusen. Gusen as indeed the 2nd Katyn.