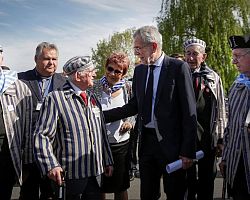 After yearlong efforts by the Gusen Memorial Committee (GMC) and the Republic of Poland, the purchase of some essential remnants of the former Gusen I concentration camp was completed in March 2022 by the Republic of Austria.

With March 8, 2022, the Mauthausen Memorial started also the process for the further development of the Gusen Memorial sites, involving interest groups at regional, national and international level.

Both events represent a milestone in the memorial site policy of the Republic of Austria for the former Mauthausen-Gusen complex of concentration camps since regaining state sovereignty in 1955 and marks a great and unique opportunity to close one of the last great wounds in the memory of the NS tyranny in Austria and to safeguard the memory of the former Gusen complex of concentration camps for future generations.

On March 31, 2022, Director Barbara Glück of the Mauthausen Memorial and Mayor Christian Aufreiter presented the now started process for the further development of the Gusen Memorial to interested groups from the population of the municipality of Langenstein in the new municipal office.

Representatives of the Austrian government will officially commemorate in Gusen for the first time since 1945 on May 4, 2022 to demonstrate their clear commitment to a contemporary and modern culture of remembrance in Gusen as well.